What to Look For in a Distribution

10.2. What to Look For in a Distribution¶

Visual displays of a feature can help us see patterns in observations; they are often much better than direct examination of the numbers or strings themselves. The simple rug plot locates each observation as a “yarn” in a “rug” along an axis. The rug plot can be useful when we have a handful of observations, but it soon gets difficult to distinguish high density (most populated) regions with, say, even 100 records. The figure below shows a rug plot with about 150 longevity values for dog breeds along the top of a histogram.

Although we can see an unusually large value that’s greater than 16, it’s hard to compare the density of yarns in different regions. Instead, the histogram gives a much better sense of the density of observations for various longevity values. Similarly, the density curve shown below gives a picture of the regions of high and low density.

In both the histogram and density curve, we can see that the distribution of longevity is asymmetric. There is one main mode around 12 years and a shoulder in the 9-11 year range, meaning that while 12 is the most common longevity, many breeds have a longevity one to three years shorter than 12. We also see a small secondary mode around 7, and a few breeds with longevity as long as 14-16 years.

When interpreting a histogram or density curve, we examine: the symmetry and skewness of the distribution; the number, location, and size of high-frequency regions (modes); the length of tails (often in comparison to a bell-shaped curve); gaps where no values are observed; and unusually large or anomalous values. Figure 10.1 provides a characterization of a distribution with several of these features. When we read a distribution, we connect the features that we see in the plot to the quantity measured. 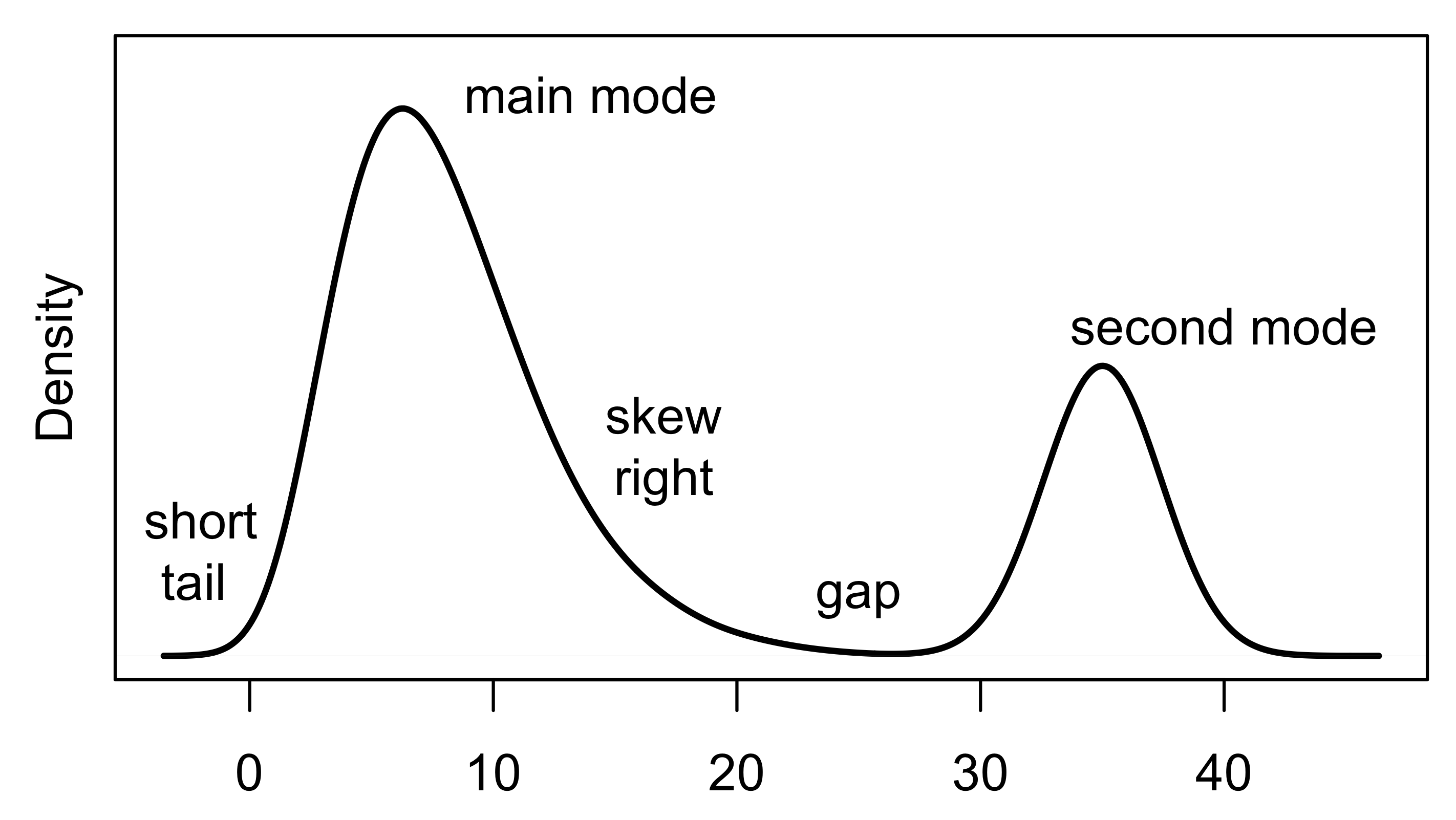 Fig. 10.1 Example density plot that connects qualities of a distribution to the shape of the density curve.¶

As another example, the distribution of the number of ailments in dog breed, appears in the following histogram. A value of zero means this breed has no genetic ailments, one corresponds to one genetic ailment, and so on. From the histogram, we see that the distribution of ailments is unimodal with a peak at zero. We also see that the distribution is heavily skewed right, with a long right tail indicating that some few breeds have between four and nine genetic ailments. Although quantitative, ailments is discrete because only a few integer values are possible. For this reason, we centered the bins on the integers so the bin from 1.5 to 2.5 contains only those breeds with two ailments. We also made the rightmost bin wider. We lumped into one bin all of the breeds with four to nine ailments. When bin counts are small, we use wider bins to further smooth the distribution because we do not want to read too much into the fluctuations of small numbers. In this case, none of the breeds have six or seven ailments, but some had four, five, eight and nine.

Density in the y-axis

Notice that the y-axis in the histogram of longevity and the histogram of ailments are both labeled “Density”. The term “density” implies that the total area of the bars in the histogram is 1. We can think of the histogram as a skyline with tall buildings having denser populations. To find the fraction of observations in any bin, we compute the area of the rectangle. For example, the rectangle that runs from 3.5 to 9.5 in the ailments histogram contains about 10% of the breeds: 6 (width) × 0.017 (height) is roughly 0.10. If all of the bins are the same width, then the “skyline” will look the same whether the y-axis represents counts or density. Changing the y-axis to counts in this histogram would give a misleading picture of a very large rectangle in the right tail.

With a histogram we hide the details of individual yarns in a rug plot in order to view the general features of the distribution. Smoothing refers to this process of replacing sets of points with rectangles; we choose not to show every single point in the dataset in order to reveal broader trends. We might want to smooth out these points because: this is a sample and we believe that other values near the ones we observed are reasonable; and/or we want to focus on general structure rather than individual observations. Without the rug, we can’t tell where the points are in a bin.

Smooth density curves, like the one we showed earlier for longevity, also have the property that the total area under the curve sums to 1. The density curve uses a smooth kernel function to spread out the individual yarns and is some times referred to as a kernel density estimate or kde for short.

With qualitative data, the bar plot serves a similar role to the histogram. The bar plot gives a visual presentation of the “popularity” or frequency of different groups. However, we cannot interpret the shape of the bar plot in the same way as a histogram. Tails and symmetry do not make sense in this setting. Also, the frequency of a category is represented by the height of the bar, and the width carries no information. The two bar charts below display identical information about the the number of breeds in a category; the only difference is in the width of the bars. In the extreme, the line plot on the right eliminates the bars entirely and represents each count by a single dot. (Without the connecting lines, the right most figure is called a dot chart.) Reading this line plot, we see there are few breeds that are not suitable for children.

Now that we have covered how to examine distributions of single features, we turn to the situation when we want to look at two features and how they relate.

10.3. What to Look For in a Relationship