Probability for Inference and Prediction

17.6. Probability for Inference and Prediction¶

Hypothesis testing, confidence intervals, and prediction intervals rely on probability calculations computed from the sampling distribution and the data generation process. These probability frameworks also enable us to run simulation and bootstrap studies for a hypothetical survey, an experiment, or some other chance process in order to study its random behavior. For example, we found the sampling distribution for an average of ranks under the assumption that the treatment in a Wikipedia experiment was not effective. Using simulation, we quantified the typical deviations from the expected outcome and the distribution of the possible values for the summary statistic. The triptych in Figure 1 17.1 provided a diagram to guide us in the process; it helped keep straight the differences between the population, probability, and sample and also showed their connections. In this section, we bring more mathematical rigor to these concepts.

We formally introduce the notions of expected value, standard deviation, and random variable, and we connect them to the concepts we have been using in this chapter for testing hypotheses and making confidence and prediction intervals. We begin with the specific example from the Wikipedia experiment, before we generalize them. Along the way, we connect this formalism to the triptych that we have used as our guide throughout the chapter. 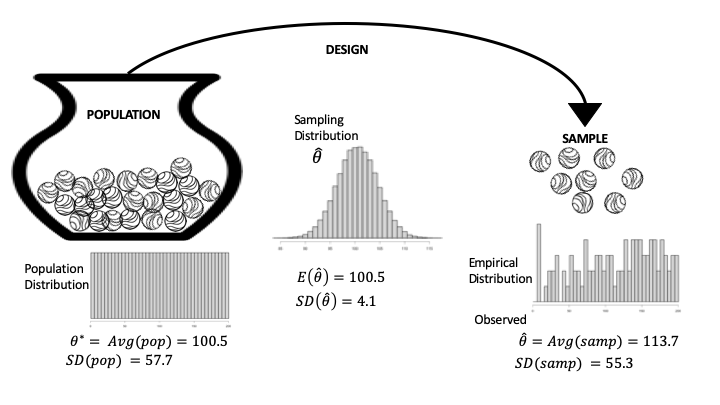 Fig. 17.3 This diagram shows the population, sampling, and sample distributions and their summaries from the Wikipedia example. In this example, the population is known to consist of the integers from 1 to 200, and the sample are the ranks of the observed post-productivity measurements for the treatment group. In the middle, the sampling distribution of the average rank is created from a simulation study. Notice it is normal in shape with a center that matches the population average.¶

Another relevant summary is the spread about \(\theta^*\), defined as the population standard deviation:

The SD(pop) represents the typical deviation of a rank from the population average. To calculate SD(pop) for this example takes some mathematical handiwork. If you want to learn more see Pitman.

The observed sample consists of the integer ranks of the treatment group; we refer to these values as \(k_1, k_2, \ldots, k_{100}.\) The sample distribution appears on the right in Figure 17.3 (each of the 100 integers appears once).

A parallel to the population average is the sample average, which is our statistic of interest:

Next we turn to the data generation process: draw 100 marbles from the urn (with values \(1, 2,\ldots,200\)), without replacement, to create the treatment ranks. We represent the action of drawing the first marble from the urn and the integer that we get, by the capital letter \(Z_1\). This \(Z_1\) is called a random variable. It has a probability distribution determined by the urn model. That is, we can list all of the values that \(Z_1\) might take and the probability associated with each:

We often summarize the distribution of a random variable by its expected value and standard deviation. Like with the population and sample, these two quantities give us a sense of what to expect as an outcome and how far the actual value might be from what is expected.

For our example, the expected value of \(Z_1\) is simply,

The term expected value can be a bit confusing because it need not be a possible value of the random variable. For example, \(\mathbb{E}[Z_1] = 100.5\), but only integers are possible values for \(Z_1\).

To complete the middle portion of Figure 17.3, which involves the sampling distribution of \(\hat{\theta}\), we express the average rank statistic as follows:

In general, a random variable represents a numeric outcome of a probabilistic event. In this book, we use capital letters like \(X\) or \(Y\) or \(Z\) to denote a random variable. The probability distribution for \(X\) is the specification, \(\mathbb{P}(X = x) = p_x\) for all values \(x\) that the random variable takes on.

Then, the expected value of \(X\) is defined as:

Although random variables can represent either discrete (such as, the number of children in a family drawn at random from a population) or continuous (such as, the air quality measured by an air monitor) quantities, we address only random variables with discrete outcomes in this book. Since most measurements are made to a certain degree of precision, this simplification doesn’t limit us too much.

Simple formulas provide the expected value, variance, and standard deviation when we make scale and shift changes to random variables, such as \(a + bX\) for constants \(a\) and \(b\).

A summary of how \(X\) and \(Y\) vary together, called the covariance, is defined as:

The covariance enters into the calculation of \(\mathbf(a + bX + cY)\), as shown below:

This situation arises with the urn model where \(X_1, \ldots,X_n\) are the result of random draws with replacement. In this case, \(\mu\) represents the average of the urn and \(\sigma\) the standard deviation.

However, when we made random draws from the urn, they were made without replacement. In this situation, \(\bar{X}\) has the following expected value and variance:

Notice that while the expected value is the same as when the draws are without replacement, the variance and SD are smaller. These quantities are adjusted by \((N-n/(N-1)\), which is called the finite population correction factor. We used this formula earlier to compute the \(SD(\hat{\theta})\) in our Wikipedia example.

Returning to Figure 17.3, we see that the sampling distribution for \(\bar{X}\) in the center of the diagram has an expectation that matches the population average; the SD decreases like \(1/\sqrt{n}\) but even faster because we are drawing without replacement; and the distribution is shaped like a normal curve. We saw these properties earlier in our simulation study, any you can read more about the probability theory behind these observations in XX.

Now that we have outlined the general properties of random variables and their sums, we connect these ideas to testing, confidence, and prediction intervals.

17.6.3. Probability behind testing and intervals¶

As mentioned at the beginning of this chapter, probability is the underpinning behind conducting a hyptohesis test, providing a confidence interval for an estimator and a prediction interval for a future observation.

We now have the technical machinery to explain these concepts, which we have carefully defined in this chapter without the use of formal technicalities. This time we present the results in terms of random variables and their distributions.

Recall that a hypothesis test relies on a null model which provides the probability distribution for the statistic, \(\hat{\theta}\). The tests we carried out were essentially computing (sometimes approximately) the following probability: given the assumptions of the null distribution,

Often times, the random variable is normalized to make these computations easier and standard:

When, \(SD(\hat{\theta})\) is not known, we have approximated it via simulation or, when we have a formula for \(SD(\hat{\theta})\) in terms of \(SD(pop)\), we substitute \(SD(samp)\) in for \(SD(pop)\). This normalization is popular because it simplifies the null distribution. For example, if \(\hat{\theta}\) has an approximate normal distribution than the normalized version will have a standard normal distribution with center 0 and SD of 1. These approximations are useful if a lot of hypothesis tests are being carried out, such as with A/B testing, for there is no need to simulate every for every statistic because we can just use the normal curve probabilities.

Note that \(\hat{\theta}\) is a random variable in the above probability statement and \(\theta^*\) is considered a fixed unknown parameter value. The confidence interval is created by substituting the observed statistic in for \(\hat\theta\) and calling it a 95% confidence interval:

Once the observed statistic is substituted in for the random variable, then we say that we are 95% confident that the interval we have created contains the true value \(\theta^*\). In other words, in 100 cases where we compute an interval in this way, we expect 95 of them to cover the population parameter that we are estimating. We show how to simulate this scenario in the Exercises.

Lastly, we consider prediction intervals. The basic notion is to provide an interval that denotes the expected variation of a future observation about the estimator. In the simple case, where the statistic is \(\bar{X}\) and we have a hypothetical new observation \(X_0\) that has the same expected value, say \(\mu\), and standard deviation, say \(\sigma\), of each \(X_i\), then we find the expected variation of the squared loss:

We also assume that the linear model is approximately correct when making these prediction intervals. In Chapter 16 we consider the case where the fitted model doesn’t match the model that has produced the data.

While we have covered a lot of theory in this chapter, we have attempted to tie it to the basics of the urn model and the three distributions: population, sample, and sampling. We wrap up the chapter with a few cautions to keep in mind when performing hypothesis tests and when making confidence or prediction intervals.