The population, sampling, and empirical distributions are important concepts that guide us when we make inferences about a model or predictions for new observations. Figure 17.1 provides a diagram that can help distinguish between them. The diagram uses the notions of population and access frame from Chapter 2 and the urn model from Chapter 3. On the left is the population that we are studying, represented as marbles in an urn with one marble for each unit. We have simplified the situation to where the access frame and the population are the same; that is, we can access every unit in the population. (The problems that arise when this is not the case are covered in Chapters 2 and Chapter 3.) The arrow from the urn to the sample represents the design, meaning the protocol for selecting the sample from the frame. The diagram shows this selection process as a chance mechanism, represented by draws from an urn filled with indistinguishable marbles. On the rightside of the diagram, the collection of marbles constitutes our sample (the data we got). 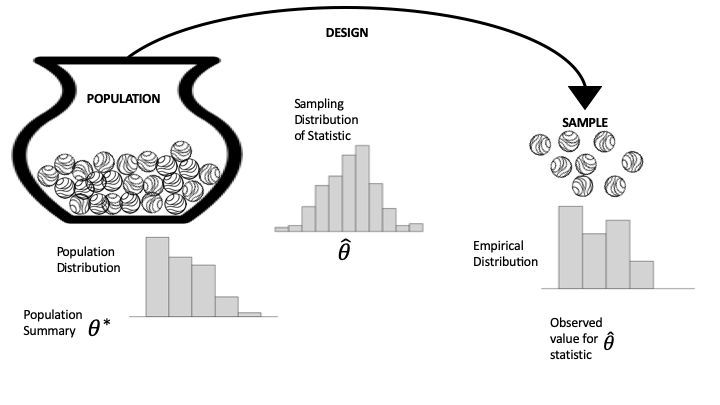 We are often interested in a summary of the sample measurements, such as the mean, median, slope from a simple linear model, etc. And, typically, this summary statistic is an estimate for a population parameter, such as the population mean, median, etc. The population parameter is shown as \( \theta^* \) on the left of the diagram, and on the right, the summary statistic, calculated from the sample, is \( \hat{\theta} \).

The chance mechanism that generates our sample, might well produce a different set of data if we were to conduct our investigation over again. But, if the protocols are well designed, we expect the sample to still resemble the population. In other words, we can infer the population parameter from the summary statistic calculated from a sample. The sampling distribution in the middle of the diagram is a probability distribution for the statistic. It shows the possible values that the statistic might take for different samples and their chances. In Chapter 3, we used simulation to estimate the sampling distribution in several examples. In this chapter, we revisit these and other examples from earlier chapters to formalize the analyses.

Finally, we typically don’t know the population distribution or parameter, and we try to infer the parameter or predict values for unseen units in the population. At other times, a conjecture about the population can be tested using the sample. Testing is the topic of the next section.

17. Theory for Inference and Prediction