In many hypothesis tests the assumptions of the null hypothesis lead to a complete specification of a hypothetical population and data design (see Figure 17.1), and we use this specification to simulate the sampling distribution of a statistic. For example, the rank test for the Wikipedia experiment, led us to sampling the integers 1, …, 200, which we easily simulated. Unfortunately, we can’t always specify the population and model completely. To remedy the situation, we substitute the data for the population. This substitution is at the heart of the notion of the bootstrap. Figure 17.2 updates Figure 17.1 to reflect this idea; here the population distribution is replaced by the empirical distribution to create what is called the bootstrap population. 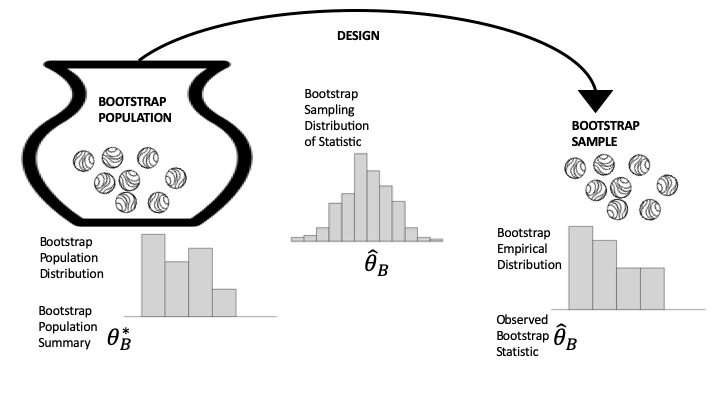 Fig. 17.2 This diagram imitates the data generation process by bootstrapping. Comparing this figure to Figure 17.1, you can see that the sample has been placed in the urn as a substitute for the population. The far right side shows a bootstrap sample taken using the same chance process as in the original study. In the middle, the sampling distribution of the bootstrap statistic is still a probability distribution based on the same mechanism for selecting the sample as in the original model, but now uses the bootstrap population.¶

The example of vaccine efficacy, used a bootstrap-like process, called the parameterized bootstrap. Our null model specified 0-1 urns, but we didn’t know how many 0s and 1s to put in the urn. We used the sample to determine the proportions of 0s and 1s; that is, the sample specified the parameters of the multivariate hypergeometric.

17.3.1. Boostrapping a test for a regression coefficient¶

The case study on calibrating air quality monitors (see Chapter 12) fitted a model to adjust the measurements from an inexpensive monitor to more accurately reflected true air quality. This adjustment included a term in the model related to humidity. The fitted coefficient was about \(0.22\), so that on days of high humidity the measurement is adjusted upward more than on days of low humidity. However, this coefficient is close to 0, and we might wonder whether including humidity in the model is really needed. In other words, we want to test the hypothesis that the coefficient for humidity in the linear model is 0. Unfortunately, we can’t fully specify the model because it is based on measurements taken over a particular time period from a set of air monitors (both PurpleAir and those maintained by the EPA). This is where the bootstrap can help.

Our model makes the assumption that the air quality measurements taken resemble the population of measurements. Note that weather conditions, the time of year, and the location of the monitors makes this statement a bit hand-wavy; what we mean here is that the measurements are similar to others taken under the same conditions as those when the original measurement were taken. Also, since we can imagine a virtually infinite supply of air quality measurements, we think of the procedure for generating measurements as draws with replacement from the urn. (Recall that in Chapter 2 we modeled the urn as repeated draws with replacement from an urn of measurement errors. This situation is a bit different because we are also including the other factors mentioned already (weather, season, location).

Our model is focussed on the coefficient for humidity in the linear model:

We use the linear model fitting procedure from Chapter 15.

Our bootstrap population are the measurements from Georgia that we used in Chapter 15). Now, we sample rows from the data frame (which is equivalent to our urn) with replacement using the chance mechanism randint. This function takes random samples with replacement from a set of integers. We use the random sample of indices to create the bootstrap sample from the data frame. Then we fit the linear model and get the coefficient for humidity (our bootstrap statistic). The boot_stat function below performs this simulation process.

When we repeat this process 10,000 times, we get an approximation to the bootstrap sampling distribution of the bootstrap statistic (the fitted humidity coefficient).

We are interested in the shape and spread of this bootstrap sampling distribution. (We know that the center will be close to the original coefficient of \(0.21\).)

None of the 10,000 simulated regression coefficients are as small as the hypothesized coefficient. Statistical logic leads us to reject the null hypothesis that we do not need to adjust the model for humidity.

The form of the hypothesis test we performed here looks different than the earlier tests because the sampling distribution of the statistic is not centered on the null. That is because we are using the bootstrap to create the sampling distribution. We are in effect using a confidence interval for the coefficient to test the hypothesis. In the next section we introduce interval estimates more generally, including those based on the bootstrap, and we connect the concepts of hypothesis testing and confidence intervals.