Many fundamental aspects of data science, including data design, rely on uncertain phenomenon. The laws of probability allow us to quantify this uncertainty. In this section, we will provide a quick review of important probability concepts for this course.

Suppose we toss two coins with one side labeled heads (\(H\)) and the other labeled tails (\(T\)). We call the action of tossing the coins and observing the results our experiment. The outcome space \(\Omega\) consists of all the possible outcomes of an experiment. In this experiment, our outcome space consists of the following outcomes: \(\Omega = \{HH, HT, TH, TT\}\).

An event is any subset of the outcome space. For example, “getting one tails and one heads” is an event for the coin toss experiment. This event consists of the outcomes \(\{HT, TH\}\). We use the notation \(P(\text{event})\) to represent the probability of an event occurring, in this case, \(P(\text{one heads and one tails})\).

In the coin toss experiment, the events \(\{HH, HT, TH, TT\}\) are all equally likely to occur. To calculate \(P(\text{one heads and one tails})\), we see that there are two outcomes in the event and four outcomes total:

There are three fundamental axioms of probability:

This is the third axiom of probability, the addition rule.

To understand this rule, consider the following Venn diagram from the Prob 140 textbook: 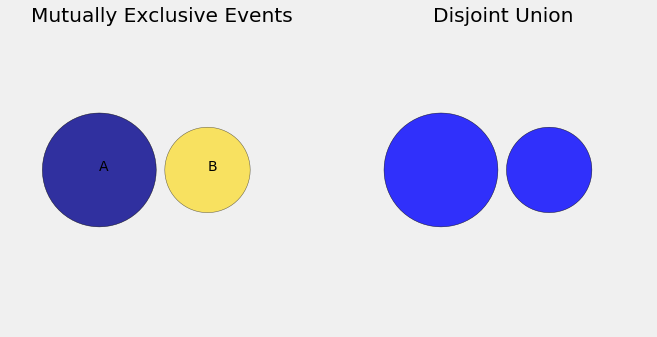 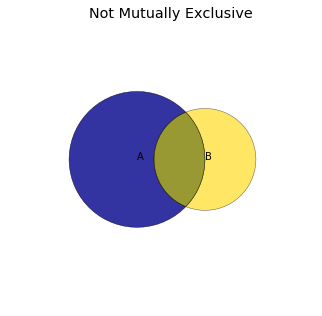 To compensate for this overlap, we need to subtract out the the probability \(P(A \cap B)\) that both \(A\) and \(B\) occur. To calculate the probability that either of two non-mutually exclusive events occurs, we use:

One simple way to calculate this probability is to enumerate the entire outcome space:

Since there our event consists of only one outcome:

In certain cases, two events may be independent. That is, the probability that \(B\) occurs does not change after \(A\) occurs. For example, the event that a 6 occurs on a dice roll does not affect the probability that a 5 occurs on the next dice roll. If \(A\) and \(B\) are independent, \( P(B | A) = P(B) \). This simplifies our multiplication rule:

Although this simplification is extremely convenient for calculation, many real-world events are not independent even if their relationship is not obvious at a first glance. For example, the event that a randomly selected US citizen is over 90 years old is not independent from the event that the citizen is male—given that the person is over 90, the person is almost twice as likely to be female than male.

As data scientists, we must examine assumptions of independence very closely! The US housing crash of 2008 might have been avoided if the bankers did not assume that housing markets in different cities moved independently of one another (link to an Economist article).